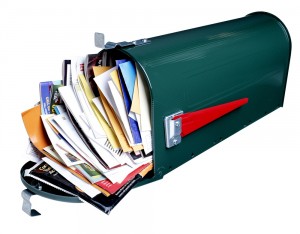 19 salon marketing tactics – the dinosaur that still bites – In an age where business owners seem obsessed with YouTwitFace and InstaPin, it’s easy to lose sight of the fact that old-fashioned direct mail has worked for a hundred years – and still works, brilliantly. If it’s done the right way. According to a survey conducted by by Millward Brown, a leading global research agency, ”physical media–AKA direct mail–left a ‘deeper footprint’ in the brain.” In other words media that consumers can touch and feel resonated and touched more emotions than those of the digital variety.

And those consumers that are affected by “physical media” are not just the older demo, as many marketers believe.
Here’s a Direct Mail Checklist – print this out and keep it handy for the next time you’re contemplating a direct mail piece, such as a mailbox flier or a letter to clients.

3. Use a dimensional package. Boxes always get opened. Always. Just make sure your company name’s prominent on the outside, otherwise the bomb squad may get hold of it first.

4. Version your envelope to your list. Nothing will get a prospect to open an envelope faster than if it’s obviously for them. For example, “Inside, a special offer for owners of businesses.”

5. Make the letter look like a letter. Not some institutionalized, obviously mail-merged piece of mass-marketing. It should look as much as possible like a personal one-to-one communication. It’s why I use and recommend a font like Courier New instead of Times New Roman or Ariel – which look just like they’ve been done on an office computer.

6. Make the letter personal. It should read and sound like a personal letter, even intimate. Written with a different voice than a standard business letter. Read it aloud. If it doesn’t sound like you’d say it to somebody sitting in front of you, gas it and start again. It continues to amaze me how much stiff, awkward, yet ostensibly ‘businesslike’ mail crosses my desk.

7. Write the letter in the first person. It mystifies me why, as a business grows, its owner or owners begin to want to hide behind some sort of amorphous, anonymous corporate entity. Say ‘I’, not ‘we’. A famous letter from the President of AT&T to its customers in the US began: “I love a challenge. As the President of AT&T Consumer Long Distance Services, I face them every day. And that’s why I’m writing to you.” I wish I’d written that paragraph. You can’t help but read on. It won back more than 1.2 million customers without even making an offer. Telstra’s Ziggy Switkowski should take note.

8. Add a powerful PS. I read something in a marketing magazine recently that said a PS was passe and nobody read them any more. Nuts. It’s the first thing a lot of people read, so always add one, and make it powerful. Restate your offer. Re-inforce your guarantee. Add your physical location, with reference to some well-known building or business nearby.

9. Make it longer. I have this debate with clients all the time. How long should a letter be? There’s only one answer – as long as it’s interesting. You’re not talking to everyone, you’re talking to the small percentage of your target market that will truly be interested in what you have to offer. Typically my letters and the letters I write for clients run to at least half a dozen pages. They always sell better than short letters. Always.

10. Use a yellow ‘post it’ note. I haven’t tried this yet, but direct marketing colleague Alan Rosenspan says he’s used it to lift response by 10%. One technique is to put a yellow post it note on a page that seems to have been ripped out of a magazine. “Bob, try this, it really works.”

11. Give them a way to respond. Amazing the amount of marketing that looks great and then fizzles out leaving the reader no way of actually buying the stuff or picking up the phone. Always give several different ways to respond…phone, preferably a 1800 number, by fax, by email. Not too many though. Give people nine ways to get off a sinking ship and they all drown.

12. Personalise the reply card. Here’s the test: If you up-end the envelope and nothing falls out but the reply card, is there enough on there to encourage a reply? If your sales message is strong and the card or page has the prospect’s name on it, you’re on a winner.

13. Use anecdotes. It’s supposed to be a personal communication to one person – even if you’re mailing to a million. Tell stories, make them personal, they can be a powerful way of backing up what you’re saying, and they lift interest. “Take my own teeth, for example,” a dentist might write. “My own dentist said to me the other day, Alan, this one’s going to have to come out.”

14. Say ‘You” as much as possible. There are a dozen or so words direct marketers have proven to be powerful in headlines and letters, and there’s none more powerful than the simple ‘you’. Use it as often as you can.

16. Use photographs. Nothing but nothing is more powerful proof than a photograph. Why do you think the weight-loss people use before and after pictures? Because they sell – they are what draws the eye and a response like “I want to be like that!”

17. Always include a guarantee. If you want a rule, this is one of the unbreakable ones: don’t try to sell anything without a guarantee of some kind. Make it a BIG guarantee, outrageous if possible. One of the most outrageous guarantees I’ve seen is from Jerry Jones, CEO of Media Group Corp in Oregon. Jerry sells ‘patient retention’ programs to dentists – it’s a newsletter to several hundred of the dentist’s best patients, prompting them to make referrals and spend more on cosmetic treatment. Jerry has scores of testimonials from dentists and doctors telling him how successful the program is for them.

Jerry’s guarantee: “If after 90 days you aren’t satisfied that the cost of my program isn’t offset by the gain in production, I’ll not only give you all your money back, I’ll fly you and a partner to Florida for a long weekend, AND I’ll spend two days in your practice doing menial tasks.”

18. Increase the offer if they act now. Anything you can do to get people to act now, rather than put it off, can increase response. For my ‘paperlessoffice’ business, I offered a completely free one-month trial, but only if the offer was taken up in January. Result: a full book for January.

19. Put a deadline on the offer. The role of the offer is to get people to act now. But make sure you give people enough time to respond, say a few weeks.