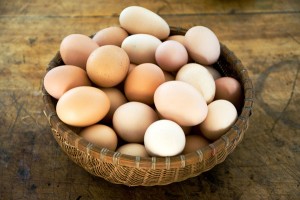 Have you ever put all your eggs in one basket, all your hopes for success into a single event, or campaign…and suffered the bitter disappointment of having it all fall apart when matters beyond your control flush it all down the toilet?

This week I’ve seen a prime example of just how dangerous for business that reliance on one ‘big thing’ can be. You put all your marketing hopes in a single mailbox flyer, or one ad in the newspaper, or a radio campaign…and ‘it’ doesn’t work. You’re convinced that this one big thing is going to go gangbusters, that customers will stampede through your doors….and then…and then…nothing happens!

Well, such massive disappointment might have happened to me this week, if not for my ingrained fear of the most dangerous number in business. The number ‘One’. 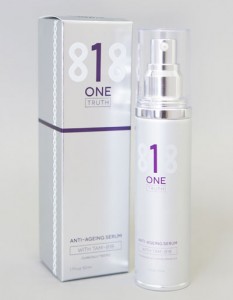 With my other hat on this week, as CEO of 1Truth Australia which controls the distribution of the new anti-ageing skin serum OneTruth818 throughout Australia, I’ve been escorting the world’s most prominent telomere scientist in a frantic round of promotional media appearances, seminars and meet-n’-greets in Sydney, Melbourne and Brisbane.

(Dr Bill Andrews PhD is head of Sierra Sciences research lab, and the man behind the telomere-lengthening compounds in Isagenix’s Product B, TA Sciences’ TA-65, and the man who discovered the most powerful telomerase activating compound of them all, the TAM-818 molecule at the heart of OneTruth818 skin serum.)

And I can tell you from personal experience that like a hot air balloon, it can blow at any seam. Today it almost did, thanks to a cyclone called Marcia. But…aware of the Danger of One, PR specialist Anna Rizzo and I and the team at Inskin Cosmedics had spent months planning a series of events to maximize Dr Andrews’ (very expensive) trip to Australia to help launch OneTruth818. It started with a live interview with popular media doctor Ross Walker on his Sunday night radio show on 2UE. The following morning, another radio interview, and that night, a live presentation in Sydney to scores of Inskin Cosmedics salon owners and staff.

Channel 7’s Dr Andrew Rochford interviewed Dr Andrews for his TV segment the next morning, and right after that we flew down to Melbourne where Dr Andrews presented his scientific discoveries to more than 140 salon owners, doctors and staff, and up to Brisbane the next day for a similar event that evening. 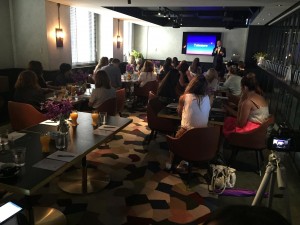 Weeks of relentless PR work by Anna paid off the next morning in Sydney. By catching a 5am flight out of Brisbane, Dr Andrews was just in time to present his research – and the OneTruth818 product that carries his age-slowing molecule – to more than 30 journalists and bloggers, including Vogue Magazine, Harpers Bazaar, Woman’s Day, Channel 9, Men’s Style, Beauty Heaven, the Daily Telegraph and a score more high-profile media, followed by a presentation last night to a room full of Isagenix devotees, who regard Bill Andrews as something of a cult figure.

This morning he was booked to appear on Channel 7’s top-rating breakfast show Sunrise, and right after that, with Ita Buttrose and the panel on Channel 10’s Studio 10. And if we’d hung our hats on that one glistening jewel of free publicity, television, the entire launch would have fallen flat. 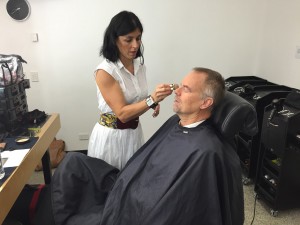 Nothing gets TV people excited much more than a good, juicy natural disaster. Planning blanket coverage, Channel 7 called first to cancel Dr Andrews’ Sunrise slot. So we made our way to the nearby Channel 10 studios, where Dr Andrews was quickly ushered into makeup. Two minutes before he was due to walk onto the set, a profusely apologetic young production assistant told us Cyclone Marcia coverage had blown Dr Andrews’ segment out of the water.

Having worked in television for 20 years of my career, I was hardly surprised. But I was extremely grateful that the lessons learned in many years of business marketing had stood us in good stead. Never, ever, ever rely on One Thing!

Stand by for a massive run of publicity over coming weeks and months as all those magazine articles and bloggers do their stuff.

For consumers and retailers outside of Australia, go here.