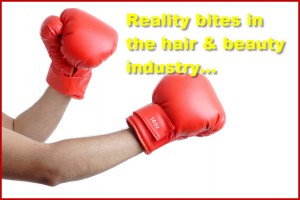 As our coaching & marketing members would know, I’ve rarely been accused of being anything less than direct. When it comes to writing about what works in marketing & business, I don’t tend to soften my words to avoid offending those with delicate sensibilities.

In business, reality IS harsh. If that offends you, stop reading now.

It obviously offended the managing editor of the country’s biggest beauty industry publication. I’ve written for this magazine many times, but when she read the following article, she emailed back

“…I think it might be a little too honest for us to run and get away with!”

Make up your own mind…

END_OF_DOCUMENT_TOKEN_TO_BE_REPLACED

Fresh back from a week in the sunny Gold Coast in Australia, there was no better way to return than to find the email below from Inner Circle Member, Bedelia Shepherd of Nelson Beauty Therapy.

Bedelia joined the program and got her copy of the Essential Salon Owner’s Marketing Toolkit® in November 2009 and has seen her relatively small Nelson salon grow over 60% in turnover into a large purpose built Medispa.

And Bedelia’s email shows that even when you are getting fantastic results from the program, things still can and will go pear shaped from time to time.  But armed with knowledge and support, it’s a heck of a lot easier to get through!

Here’s what Bedelia had to say….

Its 6.30am and I’m up bright and early today as we are moving into our new salon!

I’m over the moon and can’t believe it, that in exactly 12 months of joining WSM we have gone from a small beauty therapy business that was doing just ok, upstairs above a bar to our new purpose built medispa !

When I received my little pink box last November I knew it was going to change my life and it truly has!!

We have grown our sales by over 60%, we have a good profit margin, we have an 83% client retention rate, and all our new salon has been funded out of turnover not the bank!

At 2.30 this morning when I climbed into bed after a full day on the floor and then packing up my salon, I read Greg’s email and saw some of the negative comments from people about how it doesn’t work for everyone bla bla… I really laughed out loud!!

This does work, but salon owners need to understand it’s not the system that doesn’t work it’s how they use the system!

Now to the salon owners who find blame in others or situations, I’ll share a little something.

……… Being the new careful planer I am, I had all my new staff arranged early for the new salon, as we have gone from 2 ½  to 5 ½.  10 days ago my new therapist started, within 2 days the poor lady had to fly to the UK as her husband had very suddenly passed away while on holiday, so of course she had to go, my other new therapist then decided that gosh, do we really work past 5pm!.. and she didn’t even start, but that was ok I thought I’ll manage this week with the 2 therapists I have and my new receptionist.

Ha … at 5.30 on Tuesday of this week one of my long term therapist said to me ” I’m quitting today”, I had about 10 mins of thinking Oh S..t what am I going to do now, but hey I’ve survived the week, looked after my own clients as well as the ones that she left high and dry, run 3 marketing campaigns, signed off 3 of our big Christmas adds, dealt with builders, painters, songwriters and website designers and I’m still in one piece, so you can see why at 2.00 a.m. this morning I was laughing my head off!

WSM gives you all the tools you need to run a successful salon, from the marketing to planning to how to overcome obstacles like I’ve had this week, it teaches you long term life skills to use within your business, I always feel like there is a gentle hand guiding me in the right direction.

Chris and Greg, I can’t thank you enough, if I’ve done this in a year imagine what the next 12 months will bring!

Marketing Plan For A Hair Salon Business : Are you an entrepreneur, or just a business owner?

by Greg Milner | Jan 18, 2009 | Ask the Experts, Beating the Competition, The Right Mindset

Marketing Plan For Hair Salon Business: Are you an entrepreneur, or just a business owner?

Salon entrepreneurs & Inner Circle members Jane Dowling and Niki Koutrakis: “Xmas was a huge success! Our best ever! Gift voucher sales were up 50% on last year, and overall we were up 30% for December. That’s with the same amount of staff as well! Jane and I are so pleased as January has been off to a busy start also! And the (Advance Notice Marketing Triggers) you send out by email to Members are great…so easy to follow.”

Even those salon and spa owners whose business is recording bigger and bigger sales in spite of the recession (and there are plenty of our Inner Circle members reporting extraordinary results, see the photo and caption at left, and elsewhere on this site) it would be foolish to point at such results and say the recession does not exist per se.

While there may be green shoots of optimism, by and large the picture is a grim one across thousands of industries.

At home, my 28-year-old second son is glum. Just over a month ago he was riding high on the back of the China-driven resources boom, making over $100,000 a year as a fly-in, fly-out driller, about to buy his first property. Then the crash hit, Chinese orders for iron ore started drying up, his employer’s share price tanked 95%.

Within weeks his world has crashed, about to lose his job, no chance of buying that house. He’s no orphan.

But funny things happen when things get tough.

To me, it’s a time of terrific opportunity for (some of) those in the beauty business.

Lean close, dear reader: for here is a dose of reality that 95% of your competition doesn’t get, won’t understand, will to their detriment ignore.

The typical reaction – certainly among Hair Salon businesses – to a downturn is to close the shutters, to actually stop doing the only thing that brings money in the door – a marketing plan for a Hair Salon Business! For you, the savvy salon or spa owner, this is simply a brilliant opportunity.

Because most of your competition actually remove themselves from the market place, decrease rather than increase their visibility. They stop spending money on advertising. And that creates a sudden vacuum.

Less noise in the market place means your message can be heard easier. Fewer salons & spas spending on advertising means your ads, flyers, direct mail can cut through the clutter.

But it takes a certain entrepreneurial mindset to actually get this, a certain determination to not simply understand it, but put it into action. I wonder how many salon & spa owners reading this really regard themselves as entrepreneurial. Not many, I hazard to guess.

The relative few who do are those who tend to be attracted to the My Social Salon  marketing & mentoring program. They understand that being in the salon or spa business is not about cutting hair, or applying glop to a client’s face.

They tend to be risk-takers, because if you’re totally averse to risk, you shouldn’t be in business anyhow.

Stubborn, delusionally optimistic, creative, fearless, flexible and focussed are some of the ways psychologists and business people describe the personality of the entrepreneur.

According to former Apple executive Guy Kawasaki, “you need to be in denial or in ignorance about the huge challenges you face.”

And Dean Kamen, inventor of the Segway scooter, says he often suffers sleepless nights wrestling over whether to quit a project that’s not panning out. “You end up lying there saying, I’m not stopping. It would be an act of shallow cowardice. Or you decide to quit and you say – This is one of those ideas that just isn’t going to work.”

Of the entrepreneur mindset, Kamen says “It’s not that they’re brilliant or well-educated. They work all the time. They don’t let failure demoralize or destroy them. They pick themselves up and keep going and eventually, every once in a while, one of your ideas actually breaks through and works, and it makes all that stuff seem worthwhile.”

Tegan Messineo of Body Firming and Beauty in Bunbury, Western Australia, joined WSM and received her Essential Salon Owner’s Marketing Toolkit in October 2008. Tegan obviously believes in ACTION. She writes this week how she used the Toolkit principles, resources in the Members Only ‘Sealed Section’ website and some ‘sales thinking’ strategies to craft a radio ad.

It ran on the local radio station only THREE TIMES before she had to take it off air because it was too successful.

Members: Get Tegan’s radio ad and salon flyer NOW by logging into the Member’s Only ‘Sealed Section’ and navigating to ‘Getting New Clients – Beauty’

On its first outing, the ad ran twice on Day One and generated TEN bookings. On Day Two the ad ran ONCE and generated another 9 bookings, at which point Tegan pulled the ad because they were already up to the self-imposed limit of 19 prospects for the free trial treatment.

At the time of this posting, the salon had had 5 of those 19 in for their free treatment, and signed up FOUR of them for a full course of anti-cellulite treatment at $1500 a time, paid up front. I’ll do the sums for you:

But there was a lot of more detailed ‘sales thinking’ that went into this, I’ll let Tegan explain:

“Now even though we need to give a client 1 hour of our time and we don’t know if they are really here to buy or if they are just tire kickers, we decided that when they call up and book in we will up sell them an extra $20 and they can include Virtual Mesotherapy and Ultrasound to their appointment. Now if this client doesn’t end up purchasing anything she still has to pay her $20 so that then covers our time and product.
“Also because its a free appointment people sometimes think that they don’t need to show up. That then makes it worse for us as we have set aside this 1 hour time slot. So if they don’t want to upgrade to the Meso and ultrasound we then still get them to pay a $20 deposit which they will get back when they show up for their appointment. If they fail  to show up they forfeit their deposit.

“In the appointment we have a structure that we use.

“We have included a lot into the packages that we are selling but..in reality it doesn’t cost us much at all. Absolutely everything is factored into the price and then our mark-up is added on. With the toning tables we are using it as something to basically bulk up the package. And we have already had ladies say that they don’t want this or that in their package but because its a package they still have to pay for it.

The cost to run the radio add for this week has been $170.

Thanks for the great Ideas!!! Its sooo nice to see when all your hard work pays off!