Setting the World Brazilian Record – with a ton of free publicity! 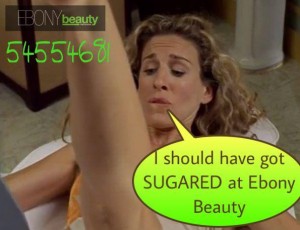 UPDATE: Membership of Worldwide Salon Marketing comes with many benefits – including but not limited to the kind of support and expertise that can give your salon or spa massive free publicity. Using WSM’s technical expertise and marketing know-how, Noosa (Queensland) salon owner Kim Susskind of Ebony Beauty is the talk of her town after staging a ‘stunt’ to create a ‘World Brazilian Record’ for the most number of Brazilian waxes performed in a single day.

Driven by free publicity in the local newspaper and radio station – generated by a carefully-crafted Press Release she downloaded from the Members Only Million Dollar Resources Library – Kim and her team of two performed no fewer than 55 Brazilians on Monday, December 8th….Here’s how Kim describes the amazing response…. 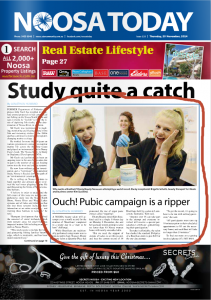 The media is a Hungry Beast. Newspapers, radio stations, TV networks, magazines, not to mention a zillion online outlets, are voracious consumers of content. They soak it up almost faster than it can be created…which is why it’s not all that difficult to take advantage of it and get priceless free publicity for your salon. Few, however, even bother to try.

All this free publicity came about because we helped Kim ‘invent’ an idea for an event. In this case, a

There’s nothing NEW in this idea. In fact, it was originally dreamed up by another Worldwide Salon Marketing member, Tracey Orr of Absolute Beauty in Launceston, Tasmania, who set a record of 38 Brazilians in a single day a couple of years ago. But records are there to be broken.

Now, I’ll admit that I’m no expert in the art of Brazilian waxing, sugaring or any other form of removing unwanted hair from one’s nether regions. That’s not the point. Any number of silly, fanciful ‘world records’ are set or broken every week, and the sillier they are, the more the media loves them. Kim got to work immediately, and drafted a Press Release and emailed it to me within hours. After some careful editing and re-writing, I sent it back to her, and she took rapid ACTION, sending it out to local newsrooms.

NOTE: Worldwide Salon Marketing members can log in here and download that exact Press Release used by Kim to get all that free publicity.)

The very next morning a photographer from the local paper was in Kim’s salon, and the result appears here. (It is worth noting that this ‘story about nothing important’ trumped dozens of other more worthy stories buried on inside pages in the same paper.)

But that’s only the beginning.

With more than 3,000 fans on her Facebook fan page, Kim posted the newspaper clipping there, as well as a short video recorded on her iPhone. That video and newspaper clipping was also posted on her website, and she emailed and SMSd her clients with a link to the video to generate more responses.

As you’ll see, marketing is often a complex and drawn out process that requires many different threads to be drawn together. 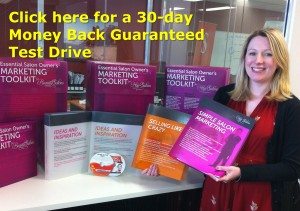 WANT THIS KIND OF ACTION IN YOUR SALON? Worldwide Salon Marketing is taking advance applications for Membership of the flagship My Social Salon marketing & Mentoring program for 2015. Click here to apply for a 30-day Money Back Guaranteed Test Drive. (Note: application does not automatically imply acceptance.)